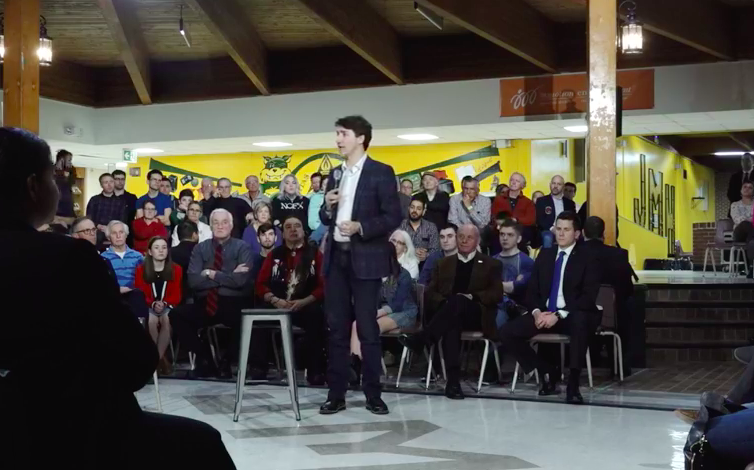 Justin Trudeau once again employed his favorite trope by calling out “fear mongering” about Canada’s border security and immigration system.

It took a special kind of ignorance, considering only one day earlier Canada’s border protection agency exposed a network of cross-border migrant smugglers.

Hours before Trudeau’s remarks, two males in Kingston were arrested over what the RCMP call “national security” concerns. At least one of them is a Syrian refugee.

Though Immigration Minister Ahmed Hussen, chief Trudeau advisor Gerald Butts, and Trudeau himself have all accused critics of “fear mongering” in recent months, this instance is perhaps the most tone deaf.

At a town hall in Miramachi, New Brunswick Thursday night, a young Syrian refugee rose to thank Trudeau for bringing her family to Canada.

After a bit of chest thumping about his government’s resettlement of Syrian refugees, Trudeau made an unprompted pivot to the broader immigration discussion in Canada.

“There are people trying to create fears around the country around immigration…. The kind of fear-mongering, the kind of intolerance, the kind of misinformation that unfortunately is going on across the country and around the world is something that all of us have a responsibility to engage with in a positive and thoughtful way,” he said.

The “fear” about which is speaks is actually concern from large swaths of Canadians that there are people abusing the country’s immigration system, lawlessly traipsing across the border, and making false asylum claims. All of this is happening.

Trudeau should be more concerned with the problem itself than he is with those speaking up about it.

But his government wants to pretend there is no problem, that the border “crisis” is a right wing concoction.

Even so, on Wednesday the Canada Border Services Agency charged Olayinka Celestina Opaleye with allegedly smuggling 10 or more asylum claimants into Canada in exchange for compensation.

CBSA alleges Opaleye was operating as part of a “network of smugglers” utilizing Roxham Rd. in Quebec. If convicted, Opaleye could face a $1 million fine or life in prison.

The law understands the seriousness of illegal immigration more than Trudeau does.

This charge doesn’t reflect an isolated incident, either.

A Cornwall man was sentenced in 2017 for smuggling foreign nationals facing deportation from the United States into Canada for money. A Regina couple was sentenced last year for bringing nine illegal immigrants into Canada.

While illegal border crossing between Canada and the United States has always been an issue, American authorities say the smugglers are now more sophisticated and better organized than ever before.

In the United States, that means taking it more seriously. In Canada, it somehow means the opposite.

The charges against Opaleye prove what critics of the pipeline of illegal immigrants into Canada have been warning—that not all of the tens of thousands of asylum seekers who’ve come to Canada in the last two years have done so with pure intentions.

Located south of Saint-Jean-sur-Richelieu, Roxham Rd. is supposed to be a dead end street, but is now a de facto freeway for illegal immigrants.

As many as 96 per cent of illegal immigrants into Canada last year came in that way. Instead of stopping it, the CBSA has set up a processing centre on site to stream line asylum applications. The Royal Canadian Mounted Police have been known to help illegal immigrants with their luggage.

It makes the human smuggling business particularly easy when Canadian authorities are doing the heavy lifting (literally and figuratively). All the smugglers have to do is get people to the border and Trudeau’s government does the rest of the work.

What a great industry to be in. Cross-border human smuggling may well be the only growth area of Canada’s economy under Justin Trudeau.

The government may wish to whitewash the problem by calling it “irregular” immigration, but it’s illegal. That’s why a woman was charged with facilitating and organizing it.

Our border is seen as irrelevant and our immigration system is abused. Yet Trudeau says “fear mongering” is the real problem.

Andrew Lawton is a fellow at True North. You can support his and his colleagues’ work with a small monthly contribution by joining the Heritage Club.