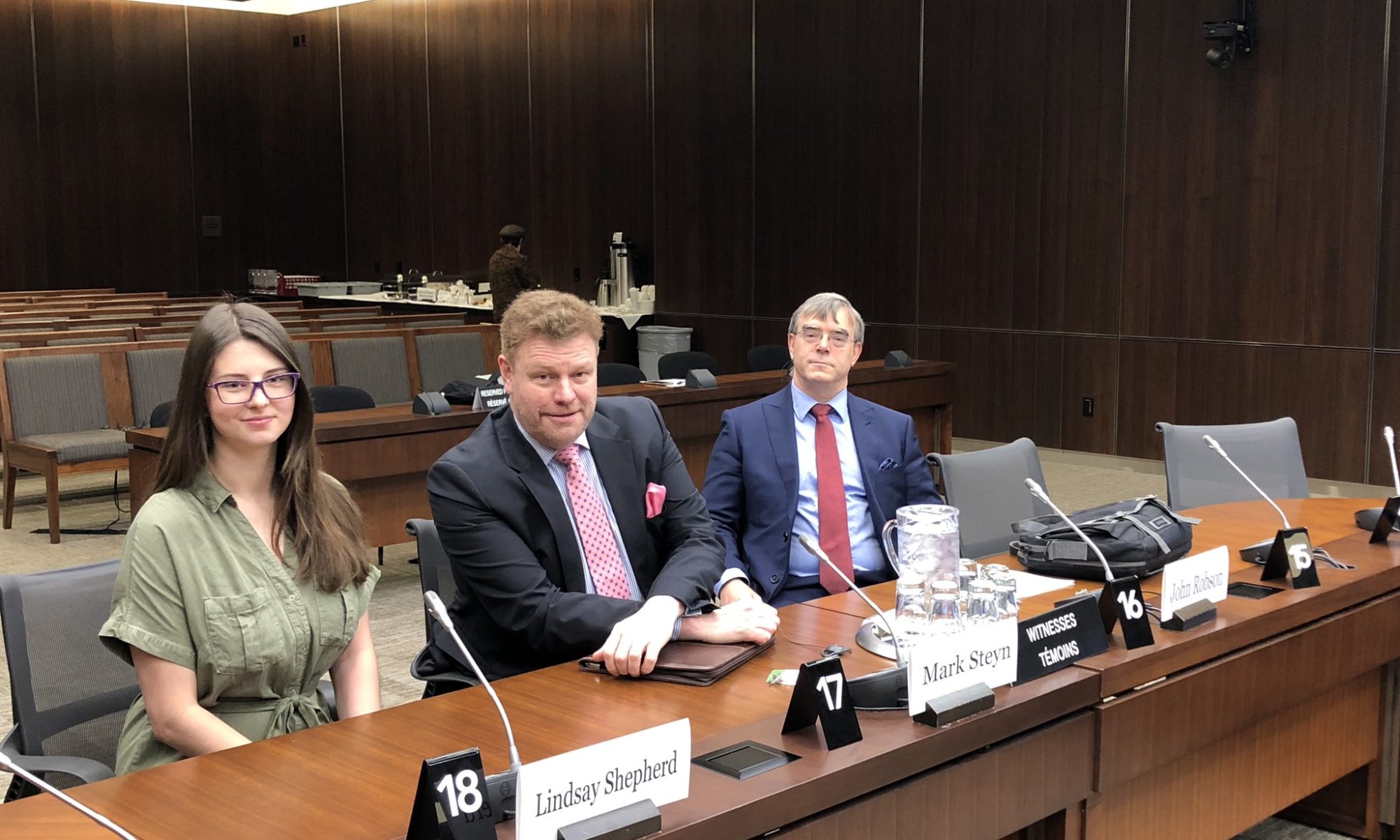 Neither Lindsay Shepherd nor John Robson nor Mark Steyn was censored today. In fact, they were all afforded a rare privilege for Canadians – the opportunity to testify before parliamentarians on a House of Commons committee.

But this is hardly worthy of celebration given how successful the efforts by members of parliament to diminish their platform were. These efforts were even supported by the Conservatives, who, despite inviting the three free speech advocates to testify as part of the Standing Committee on Justice and Human Rights’ online hate study, backed a last-minute motion to scrap the video broadcast of the proceedings.

The meeting was scheduled to run from 8:45 am to 9:45 am Tuesday morning from Ottawa’s Wellington Building.

Committee members needed to address a procedural matter before turning things over to witnesses, appointing a Conservative to serve as the committee’s vice-chair. This was necessary after Conservative leader Andrew Scheer ousted Michael Cooper from the position for wrongspeak.

While Lisa Raitt was voted in as vice-chair, Barrie Conservative MP John Brassard ending up sitting in on her behalf for the meeting.

When it would have been time for the witnesses to begin speaking, things were delayed further by a motion from Liberal MP Randy Boissonnault to alter the official record and transcript from a prior meeting, purging it of Cooper’s citation of the Christchurch killer’s name and manifesto.

Cooper did so not to to support of condone the attack, obviously, but rather to correct blatant misinformation provided by a committee witness about the political persuasions of mass killers.

Boissonnault’s insistence that murderer’s names shouldn’t exist in public record seems rather shallow given, for example, the 21 instances in parliamentary records containing the name of Michael Zehaf-Bibeau, the terrorist who killed a soldier and stormed Parliament Hill nearly five years ago.

Mentioning the names of heinous people is an exercise of truth, not glorification. But this fact is lost on the Left, who allowing something to be uttered is the same as endorsing it.

Boissonnault’s motion served not only to embarrass Cooper and the Conservatives, but also to stall. NDP committee member Randall Garrison added to the delays by calling for a recorded vote for no other reason than to waste precious time.

The Liberals and New Democrats have been mocking Conservative concerns about censorship as this committee’s study has waged on for the last two months, yet literally joined in scrubbing the official record of words uttered in a committee meeting, by one of their (former) colleagues.

It’s a dangerously poetic view of how these same legislators would love to view western civilization. Just band together and edit out the words, thoughts and ideas you think have no place in society. With Cooper, they even succeeded in editing the person out of the committee.

Liberal MP Colin Fraser attempted to hang on Lindsay Shepherd remarks made by other people, as though Shepherd’s support for one’s right to express an idea is tantamount to endorsing the expressed idea.

When it came to Garrison’s turn to ask questions, he used his entire block of time to give a monologue about his experiences as a gay city councillor-turned-member of parliament, chiding the witnesses for not living in the “real world” while giving them no opportunity to respond or offer further testimony.

Not that there was anything to respond to. He asked no questions, but kept eyeing the clock to make sure he didn’t stop talking until his time had elapsed, before turning it back to the chair.

It’s his prerogative as an MP to use the time how he sees fit, but it demonstrates that the NDP legitimately has no idea in hearing from those with whom it may have disagreements. Indeed, if he had his way, these panelists would not have been given a platform in the first place.

Only those witnesses agreeing with the NDP’s position on free speech and online hate should have been allowed to take the stand, the party clearly feels.

The procedural issues are always where the meat of censorship happens, because it’s so muddled in process and precedent that most people stop paying attention.

That happened early on in Tuesday’s meeting, when the committee’s most enthusiastic censor, the NDP’s Garrison, moved to cut off the video stream (which was already in progress) of the morning’s hearing.

Garrison said none of the prior testimony had been televised, so this hearing shouldn’t have been. He also rejected these specific panelists ideas being given a public platform after making the obligatory, half-assed statement that he isn’t against people having ideas – simply against them being heard, evidently.

I knew the motion would pass given the committee’s Liberal majority. What I didn’t anticipate was the egregious display by the committee’s Conservatives, who voted unanimously in support of the NDP motion, making it so no one in Canada could view video of these proceedings.

It wasn’t censorship. The meeting still happened, and an audio stream was broadcast and remains available. This doesn’t take away from the malodorous fact that MPs enthusiastically supported a barrier between ideas and an audience, endorsing the prevailing progressive view of free speech that even if you have the right to say something, no one should be able to hear it.

The Left says no one is entitled to an audience, which is true. What they don’t say so openly is how they endeavour to block those who wish to be an audience from doing so.

Garrison’s moral stand against videography became particularly hypocritical when an hour later he voted against a motion to cancel the television stream of Tuesday afternoon’s meeting with a Google Canada representative.

In 15 minutes of points of order and cross-partisan motions, before any of the witnesses had uttered a word, the Canadian free speech problem was on full display.

Most chilling for Canadians is that the Liberals, New Democrats and Conservatives were all on the same team.