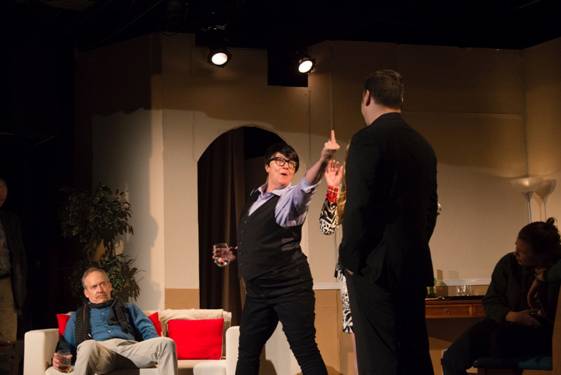 Theater is normally a great escape from life’s absurdities. That is, unless a show is crafted around those very things.

An Unsafe Space premiered in Toronto this week, a two-act play written and directed by my friend Richard Klagsbrun.

As the play’s name suggests, it’s a take on the insanity that now passes for normalcy on most college and university campuses.

Set in a liberal arts professor’s home, the plot is driven by a meeting of students and faculty brainstorming how to block some evil, conservative benefactor’s $40 million grant, which they feel will stymie the school’s social justice bona fides.

Of course, their collective unity is threatened when Oliver, an aboriginal lawyer invited to assist their mission, ends up challenging their ideas and their assumptions about him.

The nonplussed Oliver is played by Craig Lauzon, the indigenous actor of Royal Canadian Air Farce fame. Opposite Lauzon is Precious Chong of Pearl Harbor, also something in the way of Canadian artistic royalty as the daughter of Tommy Chong.

The meeting is a solid reflection of the cast of characters you’d find on a 2019 campus. The bisexual Muslim, the intersectional feminist lesbian, the lecherous white, male “ally”, and so on.

As I wrote in a promotional blurb after reading the show some months ago, “An Unsafe Space slays every sacred cow…offering a tragically funny look at how the perpetually offended interact behind closed doors.”

At a preview performance Wednesday night, Klagsbrun’s writing elicited the laughs it deserved, aptly aided by the cast’s adoption of their characters’ eccentricities.

Though my amusement turned melancholic when I was reminded how real these people and their attitudes are.

Take campus activist Lisa’s response to the simple question of whether she studies political science.

“I’m doing my honours BA in gender studies,” she replies. “But I may take some poli sci courses. It’s a natural fit, since the intersection of gender and politics are critical to understanding the hegemonic oppression imposed by western, sexist, racist, capitalist structures.”

Or one professor touting his colleague’s worth as a romantic partner.

“Don’t worry. She believes in all the right things,” he says. “Feminism, anti-capitalism, anti-globalization, opposition to hegemonic hetero-domination of society.”

I fear some audience members may view the dialogue as stilted and contrived, not realizing this is legitimately how the social justice warriors parodied in this production speak.

I’m no theater critic, but I am a student of the cultural trends that led to demands for safe spaces and the pigeon-holing of people in certain identity groups to believe certain things. That expectation from the characters and the audience is what makes Oliver so compelling.

The first act is somewhat circular, though I suspect this is a deliberate reflection of how a meeting of this sort would unfold in real life. The second act is a raucous, action-packed affair that I hope challenges the audience as much as it entertains.

My note of caution to would-be viewers is that An Unsafe Space is unabashed in its message. There’s no subtlety to it, though it shouldn’t have been written any other way given the subject matter.

Typically my criticism of any conservative-inspired art is that producers put the conservatism above the art. Conservative filmmakers are notoriously bad for this.

An Unsafe Space stands on its own, irrespective of its message. Though the message is what makes it so effective and timely.

Good as it is, it will never see the light of day on a campus. That is perhaps its greatest endorsement.